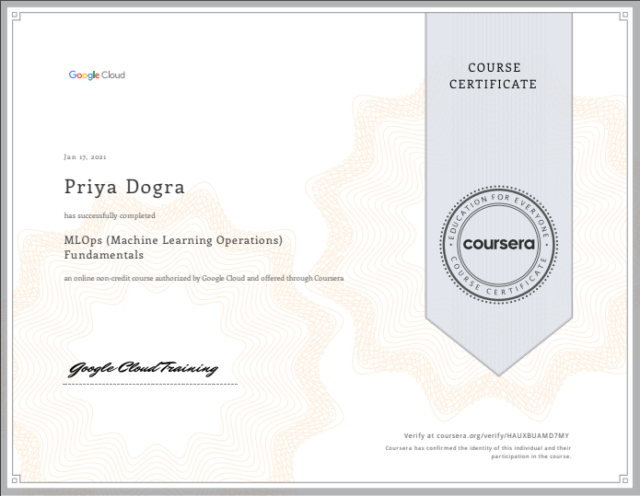 Why and When to Employ MLOps

Question 3: In what order are the following phases executed in a machine learning project?

I – Selection of ML algorithm

III – Definition of the business use case

Question 1 : Which of these problems are containers intended to solve? Mark all that are correct (3 correct answers),

Question 1 : Why do Linux containers use union file systems?

Question 2 :What is significant about the topmost layer in a container? Choose all that are true (2 correct answers).

Question 1: When you use Kubernetes, you describe the desired state you want, and Kubernetes’s job is to make the deployed system conform to your desired state and to keep it there in spite of failures. What is the name for this management approach?

Question 2 : What is a stateful application?

Question 1 : What is the relationship between Kubernetes and Google Kubernetes Engine?

Question 2 : What is the name for the computers in a Kubernetes cluster that can run your workloads?

Question 3: Which of the following supports scaling a Kubernetes cluster as a whole?

Containers and Kubernetes in Google Cloud

Question 1 : You are choosing a technology for deploying applications, and you want to  deliver them in lightweight, standalone, resource-efficient, portable packages. Which choice best meets those goals?

Question 4:You are developing a new solution and want to explore serverless application solutions. Which Google Cloud compute services provide serverless compute resources that you can use with containers?

Question 5:You are deploying a containerized application, and you want maximum control over how containers are configured and deployed. You want to avoid the operational management overhead of managing a full container cluster environment yourself. Which Google Cloud compute solution should you choose?

Question 1 : What is the difference between a pod and a container?

Which master control plane component is the only one with which clients interact directly?

Which master control plane component is the cluster’s database?

What is the role of the kubelet?

In GKE clusters, how are nodes provisioned?

In GKE, how are masters provisioned?

What is the purpose of configuring a regional cluster in GKE?

What is the relationship between Deployments and ReplicaSets?

What type of application is suited for use with a Deployment?

You want to have two versions of your application in production, but be able to switch all traffic between them. This is an example of which deployment strategy?

You want to have two versions of your application in production, but be able to a small percentage of traffic to the newer version as a gradual test. This is an example of which deployment strategy?

In a rolling update strategy, you can define the “max unavailable” parameter as a percentage. A percentage of what?

What happens if a node fails while a Job is executing on that node?

Suppose you have a Job in which each Pod performs work drawn from a work queue. How should this Job’s manifest be configured?

One major benefit of the Lineage tracking feature of AI Platform pipelines is:

The AI Hub allows you to (select all that apply)

Which of the following services can be used out-of-the box to operationalize xgboost model ?

Which command allows you to split your dataset to get 70% of it for training in a repeatable fashion?

Hyperparameter tuning happens before model training and is the task responsible for assigning initial weights to the variables (or parameters) which allow the model to find patterns on the data.

Which of the following is an INCORRECT statement about Dockerfile commands?

What is the order of steps to push a trained model to AI Platform for serving?

I – Run the command gcloud ai-platform versions create {model_version} to create a version for the model.

II – Train and save the model.

IV – Run the command gcloud ai-platform predict to get predictions.

In a lightweight Python component, the run parameters are taken from

CI/CD for a Kubeflow Pipeline

Which of the following would require a Custom Cloud Builder:

Which field in a configuration file allows the use of persistence (asset sharing):

TCS NQT – TCS National Qualifier Test for the Batch of...