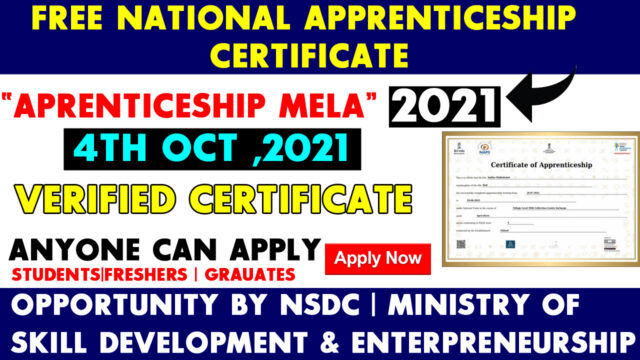 The Government of India is going to organize a huge apprenticeship fair in India on October 4, 2021, in which many types of companies can participate, its information has been told through the official website of apprenticeshipindia.org. This fair is being organized by the Regional Directorates of Skill Development and Entrepreneurship. Students of all types of trades can participate in this fair. It is not certain how many candidates will be recruited in this. You will not get any kind of job in this apprenticeship fair, in this you will get a chance to do apprenticeship.

What is an Apprenticeship?

Apprenticeship is a type of training in which it is done according to the studies done by you, like if you have studied from the fitter trade of ITI, then you will be trained fitter in apprenticeship.

Where and where Apprentice Mela is going to be held on 4 October 2021?

What is the process of Apprentice Mela of 4th October 2021?

Step 1: First of all you have to complete your profile 100% by registering on the official website of apprenticeshipindia.org then logging in.

In this, all your documents have to be uploaded on the site.

Every single scolded by you uploaded on this website should match with your marksheet, as well as the same information should be in the Aadhar card, if any one is different, then you will not get a chance to do apprentice, then keep this in mind.

After completing this work, with the above mentioned documents, you have to know whether the apprentice fair is being held on October 4 in the government ITI of your district or not, if it is, then on October 4 at 10:00 with the paperwork. Have to reach by noon.

Which establishment is going to participate in the apprentice fair ?

Here is the sample certificate :

Apple Inc. is hiring for the position of Software Engineering Intern | Apply Before 01 Sep 22