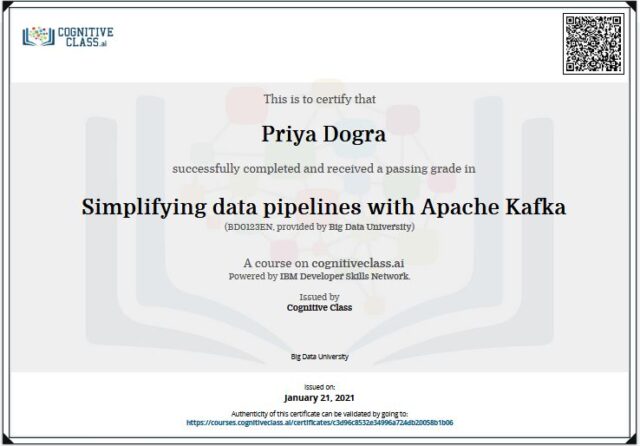 Question 1 :Which of the following are a Kafka use case?

Question 2 : A Kafka cluster is comprised of one or more servers which are called “producers”

Question 1 :There are two ways to create a topic in Kafka, by enabling the auto.create.topics.enable property and by using the kafka-topics.sh script.

Question 2 :Which of the following is NOT returned when –describe is passed to kafka-topics.sh?

Question 1 :The setting of ack that provides the strongest guarantee is ack=1

Question 2 :The KafkaProducer is the client that publishes records to the Kafka cluster.

Question 3 : Which of the following is not a Producer configuration setting?

Question 1 :The Kafka consumer handles various things behind the scenes, such as:

Question 2 : If enable.auto.commit is set to false, then committing offsets is done manually, which provides gives you more control.

Question 3 : Rebalancing is a process where group of consumer instances within a consumer group, coordinate to own mutally shared sets of partitions of topics that the groups are subscribed to.

Question 1 :Which of the following are Kafka Connect features?

A common framework for Kafka connectors

Question 3 : Spark periodically queries Kafka to get the latest offsets in each topic and partition that it is interested in consuming form.

If the auto.create.topics.enable property is set to false and you try to write a topic that doesn’t yet exist, a new topic will be created.

Which of the following is false about Kafka Connect?

Kafka comes packaged with a command line client that you can use as a producer.

What are the three Spark/Kafka direct approach benefits? (Place the answers in alphabetical order.)

Kafka Consumer is thread safe, as it can give each thread its own consumer instance

What other open source producers can be used to code producer logic?

If you set acks=1 in a Producer, it means that the leader will write the received message to the local log and respond after waiting for full acknowledgement from all of its followers.

Kafka has a cluster-centric design which offers strong durability and fault-tolerance guarantees.

Which of the following values of ack will not wait for any acknowledgement from the server?

What are In Sync Replicas?

In many use cases, you see Kafka used to feed streaming data into Spark Streaming

Which is false about the KafkaProducer send method?