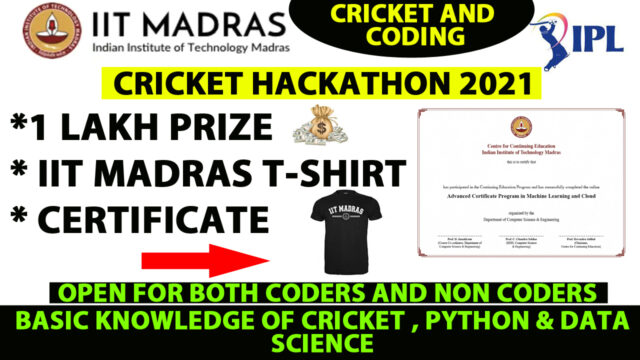 For everyone who loves CRICKET and fiddling with DATA

IIT MADRAS BSc Degree Program brings an academic contest – CRICKET and CODING CHALLENGE. Anyone who has elementary knowledge of coding and an interest in Data Science can register and compete.

Basic knowledge of cricket, Python language skills, analysing the data from previous matches and coming up with a code to predict the scores after 6 overs in every innings

A non competitive, “Guess the score” event is open to all the non-programmers who want to participate without writing any code. Special event t-shirts are up for grabs for participants in this category.

WHAT WILL BE SHARED

INSTRUCTIONS FOR THE CODING CONTEST

The actual contest will be run for atleast 25 T20 cricket matches (50 innings) between 26 April and 30 May. Actual dates will be intimated to participants soon.

The factors in deciding the overall winner of the IIT Madras Cricket Hackathon 2021will be:

Here are the prizes for the overall winners selected at the end of 50 innings of predictions.

Other participants of the coding contest – dont lose heart! We have something for you too.

Online Course on Indian Constitution by Department of Legal Affairs, Ministry of Law &...