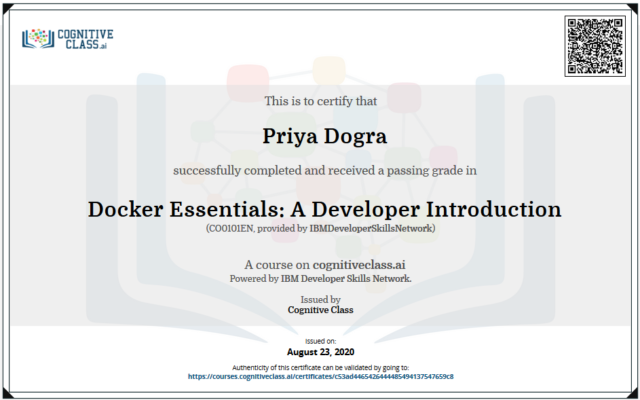 Question 1: Containers achieve isolation because of what feature in the Linux kernel?

Question 2: What is the difference between a Docker container and a Docker image?

Question 4: Which statement is not true about Docker?

Question 5: What tool makes it possible to run Docker containers on operating systems other than Linux?

Question 1 : Which file should you use to create reproducible builds for Docker images?

Question 2 : To rebuild and re-push images quickly, you should optimize your Dockerfile for what?

Question 3 : You must use Docker Hub as the central registry to share the Docker images that you create.

Question 4 : What’s the purpose of the FROM line in a dockerfile? Select all that apply.

Question 5 : What does this command do: $ docker system prune.

Question 1 : What is the operational model used by Docker Swarm for managing a cluster?

Question 2 : What effect does the routing mesh have on a Docker swarm cluster?

Question 3 : The “docker swarm init command” generates a join token. What is the purpose of that token?

Question 5 : The more manager nodes you have, the easier it is to achieve a consensus on the state of a cluster.

Question 1 :  What is one advantage of isolation that is provided by containers?

Question 2 :  What factors should you consider when you choose your FROM image?

Question 3 :  What is the best way to distribute a Dockerized application to different environments?

Question 4 :  What is a good starting point for the number of manager nodes in a cluster?

Question 6 :  What is one advantage of using containers across different environments?

Question 7 :  You need an SSH server to get a bash shell inside a container.

Question 8 :  What technologies are behind Docker’s image layering system?

Question 1 0:  Open-source container orchestration platforms, such as Docker Swarm and Kubernetes, provide what to their users?