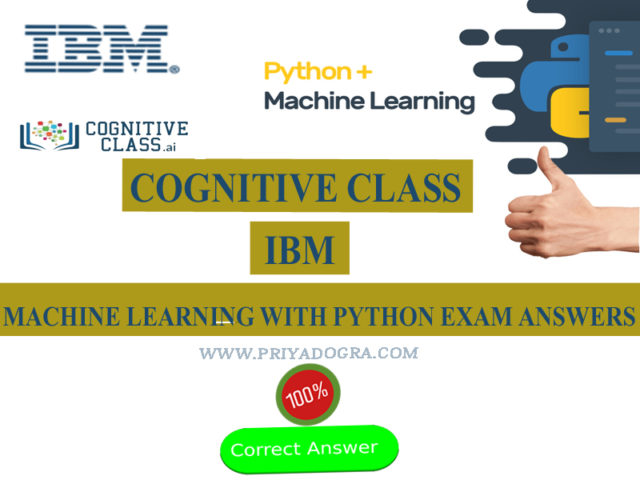 1) Machine Learning uses algorithms that can learn from data without relying on explicitly programmed methods.

2)Which are the two types of Supervised learning techniques?

3)Which of the following statements best describes the Python scikit library?

1)Train and Test on the Same Dataset might have a high training accuracy, but its out-of-sample accuracy can be low.

2)Which of the following matrices can be used to show the results of model accuracy evaluation or the model’s ability to correctly predict or separate the classes?

3)When we should use Multiple Linear Regression?

1)In K-Nearest Neighbors, which of the following is true:

2)A classifier with lower log loss has better accuracy.

3)When building a decision tree, we want to split the nodes in a way that decreases entropy and increases information gain.

1)Which one is NOT TRUE about k-means clustering??

2)Customer Segmentation is a supervised way of clustering data, based on the similarity of customers to each other.

3)How is a center point (centroid) picked for each cluster in k-means?

1)Collaborative filtering is based on relationships between products and people’s rating patterns.

2)Which one is TRUE about Content-based recommendation systems?

3)Which one is correct about user-based and item-based collaborative filtering?

Question 2) When building a decision tree, we want to split the nodes in a way that increases entropy and decreases information gain.

Question 3) Which of the following statements are true? (Select all that apply.)

Question 4) To calculate a model’s accuracy using the test set, you pass the test set to your model to predict the class labels, and then compare the predicted values with actual values.

Question 5) Which is the definition of entropy?

Question 6) Which of the following is true about hierarchical linkages?

Question 7) The goal of regression is to build a model to accurately predict the continues value of a dependent variable for an unknown case.

Question 8) Which of the following statements are true about linear regression? (Select all that apply)

Question 9) The Sigmoid function is the main part of logistic regression, where Sigmoid of 𝜃^𝑇.𝑋, gives us the probability of a point belonging to a class, instead of the value of y directly.

Question 11) The points that are classified by Density-Based Clustering and do not belong to any cluster, are outliers.

Question 12) Which of the following is false about Simple Linear Regression?

Question 13) Which one of the following statements is the most accurate?

Question 14) Which of the following are types of supervised learning?

Question 15) A Bottom-Up version of hierarchical clustering is known as Divisive clustering. It is a more popular method than the Agglomerative method.

Question 16) Select all the true statements related to Hierarchical clustering and K-Means.

Question 17) What is a content-based recommendation system?

Question 18) Before running Agglomerative clustering, you need to compute a distance/proximity matrix, which is an n by n table of all distances between each data point in each cluster of your dataset.

Question 19) Which of the following statements are true about DBSCAN? (Select all that apply)

Question 20) In recommender systems, “cold start” happens when you have a large dataset of users who have rated only a limited number of items.

Online Certificate Course on Space Technology and its Application | ISRO...